The serenity of the Cyclades

Sikinos, the small, quiet island between Ios and Folegandros, in the southern part of the Cyclades. This island is known for its beautiful beaches, serene atmosphere, wild landscapes, contact with tradition and fine local products. Also known is the legend from which she took her name, from Sikinos, the son born to the nymph nymph Oinoi as if she became the wife of Thoanda. Sikinos is characterized by its rough and attractive charm. It maintains its untouched physiognomy and encourages alternative tourism.

Chora is in itself a small painting. It consists of two neighborhoods, equally beautiful and charming, the Castle and the Village located on opposite mountain slopes. The Castle is built on the edge of the cliff. After entering through the side door, the eye is lost among white age-old houses, in alleys perfumed with jasmine, yards with bougainvillea, geraniums and vines. At the top of it three windmills stand haughtily facing the sea.

The village in the south gathers all the characteristics of a Cycladic island. A labyrinth of narrow streets connects the houses with the flowered flower beds, the passages and the hidden corners. The beaches in Sikinos are pristine with clear blue and clear waters. Some are accessible by road, some by sea and some accessible by footpaths. What is certain is that they all have turquoise crystal waters and in many there is a natural shade from the tamarisk trees. It is worth visiting one of the most beautiful caves of the Cyclades, the Black Cave which is accessible only from the sea. It is also worth walking the island as you will discover the remains of ancient settlements, Byzantine churches, gorges, distant beaches, plains with panoramic views and of course rich Cycladic nature. 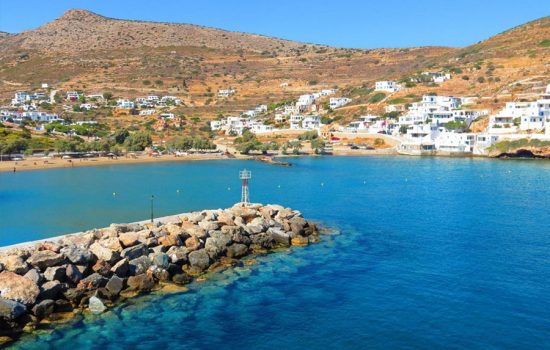 The best beaches in Sikinos

Sikinos is a small island with a perimeter of only 30 km but it is adorned with unique beaches. Most of the best known and most popular are on the east side. The unique …